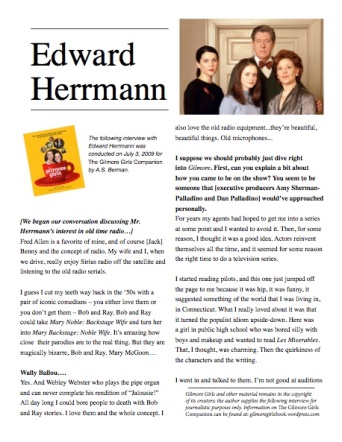 Hi all. With last week’s passing of beloved actor Edward Herrmann, I put together the complete interview I conducted with him for The Gilmore Girls Companion back in 2009. (He graciously wrote the foreword to that book.)

It occurred to me that many Soap lovers might also be fans of his work considering the wide range of programs and films he appeared in over the years.

When I went back through my notes I discovered that the interview ran to 40 typed pages in all, so it seemed best to make it available as a PDF rather than online.

I apologize for the design quality of the document itself; Pamela is up to her eyeballs in deadlines right now so I had a go at putting it together myself. She’s the designer, I’m the writer, and unfortunately I’m afraid that shows.

That said, I wanted to get this text out there sooner rather than later.

A word here on the process: I sent him a few sample questions before we actually spoke by phone for the first time. I recorded the conversation, transcribed it, and sent the transcript to him to make any corrections or clarifications he deemed fit. That corrected text is what you’ll find in this PDF.

More than anything else, I really wanted people who never had the opportunity to meet him to see how he spoke and his thought process.

He was a rare individual, and greatly missed.

PS – As a fellow old-time radio fan, I wanted to include a few quick links to the shows and personalities Mr. Herrmann references in the interview. For those interested in hearing the programs first hand, there are many free podcasts available – just search for “old time radio” or “otr” in your favorite podcatcher or in iTunes.

Other Books by A.S. Berman